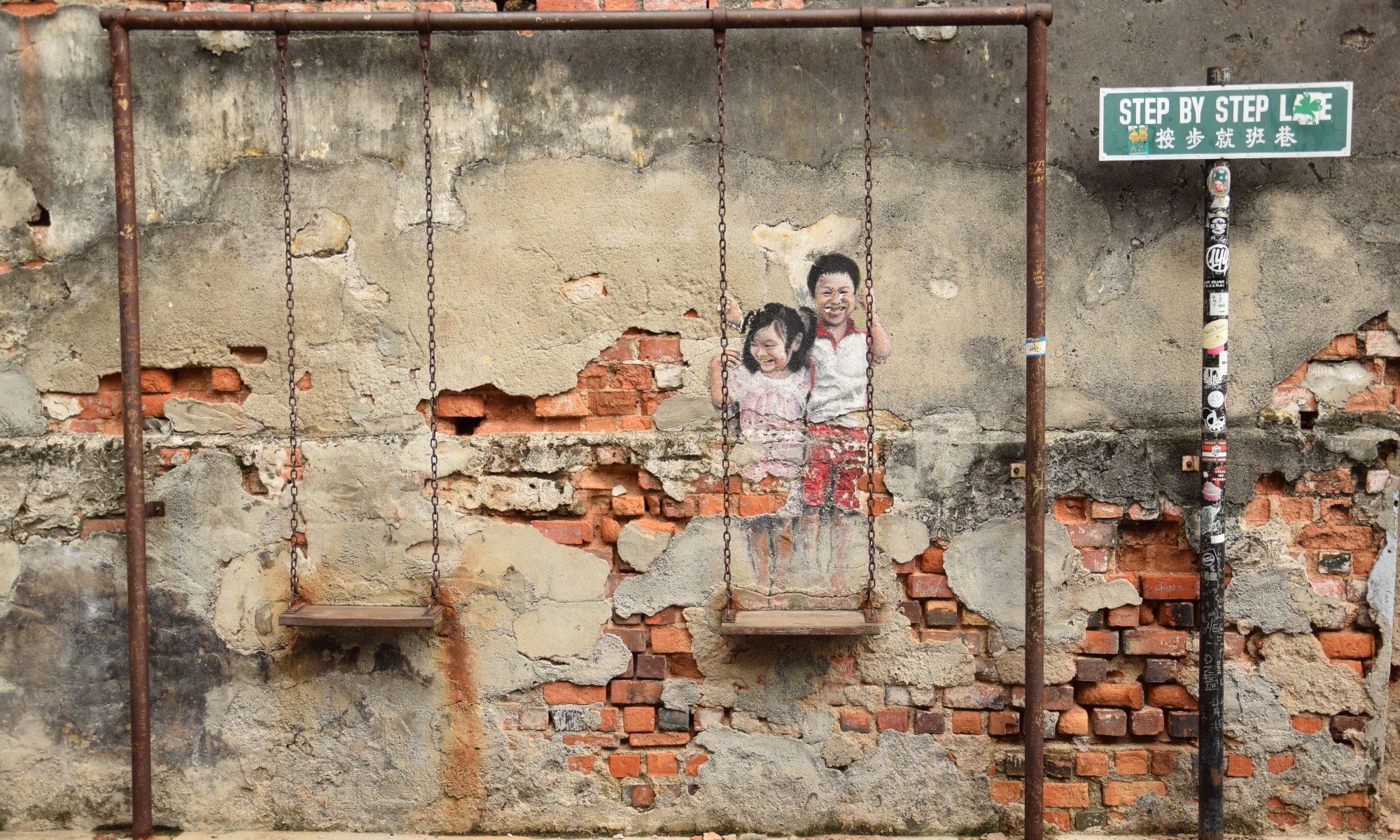 Yay – holiday. Oh dear, how much I couldn’t wait for another trip 🙂
Missed it so much and the previous trip (New Zealand) feels too far away.

But for now … Off to the airport and boarding the plane to Malaysia.

Via Abu Dhabi we flew straight into Kuala Lumpur. We arrived really late (at 11pm ish and it took forever for the luggage to arrive; we probably waited 45 minutes and ours was – of course – the last ..:) and had to make our way to the hotel in what feels the middle of the night.
During our flight we discussed the option of getting from the airport to the hotel but we were pretty glad that we took the taxi in the end.
The taxi was about 75 RM (Malaysian Ringit; with an exchange rate 1€:4,6RM) and took straight to our hotel. The Transit Hotel Kuala Lumpur simple and affordable, the rooms are clean, breakfast is included and its located central between the Triangle and Chinatown.

At this point I can say: Arrived in Malaysia. Hello Kuala Lumpur.

The first two nights of our trip we spent in KL and explored the city. Mostly by foot. To be honest, I don’t know why we didn’t take public transport that often. I guess we liked to sweat in 30° degrees and 100% humidity. 😉
We walked through Chinatown and Little India, to the Petronas Towers and the Menara KL. All the “central sights” are doable in a day and we were pretty pleased to squeeze such a lot in a couple of days.
Relief from the weather we found in the airconditioned shopping malls. There are in the central district of KL. The “modern” part of the city with loads and loads of fancy high rises, pretty apartments and shopping malls. Not our cup of tea actually but quite useful to help the European body system to cope with the tropics and regulate the body temperature from time to time.
Whilst in KL you can not go to a roof top bar and enjoy the amazing view over the light up city by night. We went to the Skybar at the Traders Hotel. From here you have such a fabulous view over the Petronas towers whilst having a yummy cocktail 🙂 They even have a small indoor pool in the bar if you feel like refreshing that way.

And after a couple of nights we picked up our hired car and hid the road – out of KL: Towards the countryside, the jungle, the Taman Negara.

A quick note here … We were pretty worried about driving in Malaysia. I mean, driving in Asia? I though we were insane and quite naïve getting persuade by our travel agent. But (!) driving in Malaysia is pretty smooth and easy. The roads are good and out of KL the traffic is not any different that Europe. The driving in general – in my opinion – is better than in Italy or Spain. 😉
So, if going to Malaysia I’d recommend a hired car. There are trains on the west coast of the mainland and cheap (small) busses but we’ve been happy with our four wheels to ourselves and not having to squeeze into a tiny bus whizzing around mountain corners.

On our way out of KL we stopped of at the Batu Caves. They are just outside of KL and not to miss. You can recognise the big golden statue from afar.
A quick visit including climbing all the stairs up and down and not getting chased by monkeys before we hit the road again – jungle here we come.

After 3 ½h and an almost-heart attack (we had to sat nav’s but both were telling us different routes and we almost got lost) we made it safe and sound – whoop whoop.
Only thing then, our accommodation for the next of couple of nights, was on the other side of the river. Which only way to cross was with small boats.
Luckily there are overall parking spaces in Malaysia so we had no trouble to park the car for a couple of days. Not for free – obviously. 5RM per day, including the arrival and departure date.
So, we left the car on one side of the river, jumped on a boat and made our way over.
We stayed at the Mutiara Tanam Negara, the only accommodation on this side of the water. Most other hostels and hotels are on the other side. The Mutiara has several small bungalows with an ensuite bathroom. It also has a Hostel, restaurant and a small shop where you can buy some snacks and also your entry ticket to the National Park/jungle.

Let me sum up our jungle experience in a few words:
Unfortunately, we didn’t see a tiger or an elephant or a tapir. But I guess it is just too touristy and all the animals hide – would do the same I guess 😉
Anyway, therefore we saw such a bunch of beautiful beautiful butterflies. And the jungle itself. Such a lush green. Thick wild forest.
Bit warm though. You know you’re on holiday in the rain forest when the mosquito repellent mixes with your sweat which is streaming down not just your face and/or back but your whole body. Not sure I have ever been that sweaty before.
The rain forest in Malaysia is the oldest in the world. The most frequently used paths are easy to find and not challenging. But if you walk on less busy routes the forest gets thicker and thicker. Less people, more nature. Wild life is hard to spot but I can’t blame the animal. I wouldn’t wonder as well why such weird creatures called human wander through my territory. 😉
Our souvenir’s weren’t pictures of tigers or tapir but mosquito bites, sweat soaked clothes and beaming faces.

Note to myself at this point: Malaysia is hot! Very hot and humid. The humidity in the is insane, so the European body needs a bit of time to get used to it. 😉

After the jungle we needed some time to cool off. Which meant … Driving to the east coast of the country (to Kuala Besut), jump on a boat and arrive at the Perhentian Island Besar. #heaven
Not quite the Maldives (also I have never been and just judge by photos I’ve seen) but still wow. Beautiful beaches, loads of palm trees, a cute Resort (Tuna Bay), corrals just offshore from the beach, yummy food, little monkey strolling around, flying squirrels and not too many people.
Time to breathe. And relax. Chill.

Our highlight of this part of the trip? For sure the two snorkel trips. So so many colourful fish, like clown fish for example. We spotted small sharks and snorkelled with turtles!!! That was just – amazing!
Apart from gazing at fish and turtles as well as chilling by the beach we had a bit of time to explore the small island a bit and even rented a small canoe for a day. Which, let me mention, is fairly hard work in over 30 degrees and sunshine but you can also stop everywhere and jump in the ocean. 🙂

So very relaxed we set of for our next stop on our road trip – Penang. The drive took us probably the double amount of time as google maps originally said but oh well – we were so chilled from the days at the beach and didn’t bother too much.
And it does take a while to be fair. The Perhentian Islands are located at the northeast of Malaysia and Penang is an island on the west coast – cross country basically.
The journey was more than worth it. Penang is beautiful and Georgetown such a cool little place. Penang has got such a long history as it was occupied for many years from the Netherlands, the Portuguese, the Chinese and also the British. Which all reflects in Georgetown’s old town.
There’s one temple next to another one (Buddhism and Hinduism), in-between mosques and churches, old buildings from different eras, house on stilts, street art, loads and loads of cages, restaurants, small stalls selling yummy street food – so many impressions. Overload in a very positive way.
Georgetown is for sure one of our Malaysian Highlights! Even though it was just as hot as the rest of Malaysia we explored most of the small town by foot. Also took the car and fought our way through crazy traffic to get to the reclining Buddha and the Penang Hill.

Next stops on our list before flying back home: Cameron Highlands, Melaka and KL again.
We were especially excited about the Cameron Highlands and the drive up there was promising. We were hoping for … beautiful scenery and tea plantations, I guess. But … we felt really disappointed to be honest. There are greenhouses everywhere, fields covered with plastic (to protect plants) and so much rubbish lying around. ☹ Plus, it was just touristy and Tanah Rata (the “main” spot in the Highlands) was just busy and noisy and dirty and the hotels and hostels so overpriced without good quality (we looked at a few before we decided on one).
So spontaneously we decided to stay just one night, instead of minimum a couple and visit the tea plantations and have some yummy food. To the Highlands defence I have to say, the tea plantations are pretty cool. We had such a great time wandering around between the tea and taking phots.
And, we had one of the best meals in Tanah Rata – curry lovers.

The last few days of our trip we spend in Melaka and KL. Quite chilled, exploring, eating yummy Malayan food. 😉

Our conclusion from two weeks Road Tripping in Malaysia: